Комикс Batman: Shadow of the Bat #83 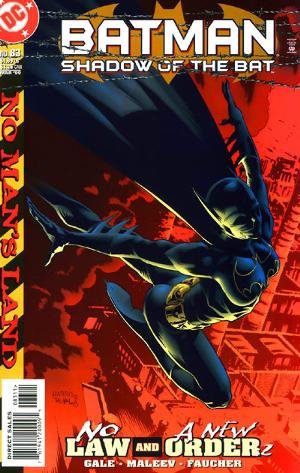 Following No Man's Land #1, one of Oracle's informants has told her about finding a spray painted bat on a wall. Although this informant is usually reliable, she just doesn't believe that Batman would resort to using spray paint to tag his territory. She also wonders if he would try to contact her if he actually was back.

In Blue Boy territory Commissioner Gordon is surviving with his cops. He is informed that they have liberated another neighborhood, and he himself uses spray paint to tag the area as under their protection. Despite some objections, he declares that they will next liberate Old Gotham and their old police headquarters. Instead of mounting a frontal assault against the Loboys, he says that they will start a war between the gang and the Street Demonz. When their ranks have been thinned, the Blue Boys will attack and take back the area. Gordon has an ulterior motive, in that his daughter, Barbara, still lives in the area, however no one objects to his plan.

Later, Gordon is planting seeds in his garden while talking about the stresses of No Man's Land with his wife, Sarah. Although he doesn't know if he is doing the right thing by starting a war, she tells him that his instincts are excellent, and now that he doesn't have to answer to politicians he is thriving. He still worries that he is becoming too much of a vigilante like Batman, yet he also wonders where Batman could be now that Gotham was in trouble.

On a dark street, three hoods try to rob two kids of their coats. Before they can attack, they are attacked themselves by Batgirl. She tells them that the area is under her protection, and they should spread the word. The two kids are scared of her, but she tells them that she is the Batman and there will always be a Bat in Gotham. One of the hoods later stands around a barrel fire talking about his experience. Others don't believe him, since they haven't seen the Bat-Signal in the sky, but he rebukes them, saying there is no electricity for the signal. An old man sits around them listening, but when confronted he runs away, leaving behind his fake beard.

In interludes a "punk" first tries to rob a "nomad" of batteries which he was going to trade with the Penguin. The punk pulls a gun, but the nomad knows he is bluffing, because a bullet would be worth more than the batteries in No Man's Land. Later, the punk meets a "little kid" looking to trade bicycle tires. The punk pulls his gun again, but the kid is saved by his new partner, who has a bow and arrow, chasing the punk away. Finally, the punk pulls his gun on a "stranger" who has a bag of goods to trade. The stranger stabs him in the neck and reveals himself to be the Joker. The Joker leaves the punk dead on the ground, with his face painted and contorted into a smile. He tags a wall and declares the area "Jokerville."

Gordon and his Blue Boys begin their planning for the war. Although Officer Pettit volunteers to fire the bullet to start it, Gordon has other plans. He and another officer sneak deep into the Street Demonz territory. Finding a tagged wall, they cross out the Demonz tag and mark it with the Loboys mark. Before they can leave, though, they are caught by three Demonz, who know they aren't Loboys, but will still kill them.