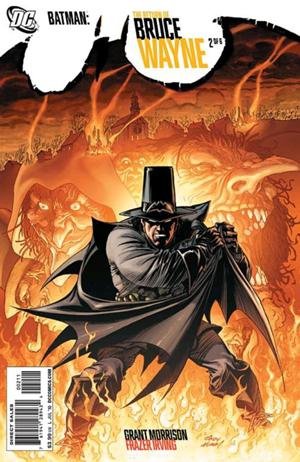 Batman: The Return of Bruce Wayne #2

Bruce Wayne saves the woman from a tentacular monster, and she then nurses Wayne back to health. Just as he passes out, he notices she wears the Batman, Superman and Wonder Woman emblems he drew on the cave, back in the Paleolithic era. He finds himself in Gotham Colony, where he assumes the identity of the witch-hunter Mordecai and solves a murder, but clashes with the witch-hunting Brother Malleus.

Meanwhile, at Vanishing Point, at the end of time, Booster Gold, Rip Hunter, Green Lantern and Superman consult the "archivist," who explains that time is like a tangled loom, continually branching off and intersecting.

At the end of the issue, the archivist is revealed to be an older version of Batman himself, who steals Rip Hunter's time bubble and leaves the heroes to experience the death of the universe, Superman pleading with him to stop. Superman reveals that, when Darkseid sent Batman back in time, he erased Bruce's memories but turned him into an unspecified 'doomsday weapon', knowing that Batman's powerful survival instincts would lead him back to the twenty-first century, at which point Darkseid's 'trap' will be triggered.

Back at the village of Gotham, Annie is being hanged by Malleus, citing her crimes as a witch. She tells him he'll pay though, as she knows his real name: Nathaniel Wayne. She curses him and all his line until the end of time, and is then dropped to her death.

Elsewhere, Bruce emerges from a large body of water, loudly yelling Annie's name. He stumbles onto the sand of a beach, right under the boot of Blackbeard, the pirate.