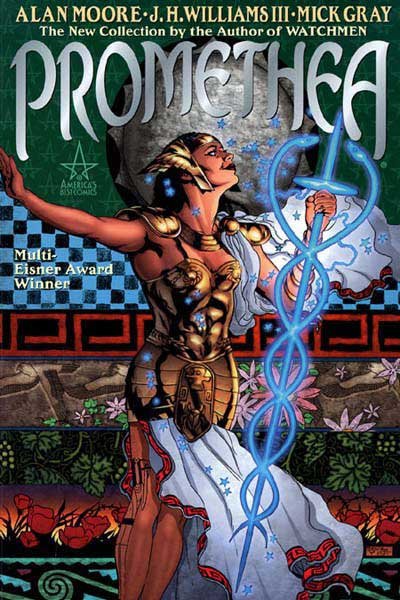 An enhanced version of modern-day New York (1999) is the main setting ofPromethea Book 1, alongside an alternate realm where all the vivid imaginings that go on in the collective consciousness (and unconscious) live, the Immateria. Main character Sophie and her bumbling best friend Stacia are doing assignments on comic books. Sophie’s subject is the oft-referenced character Promethea, who has seen many manifestations in visual literature. Sophie is compelled to find the links.

She tracks down a woman called Barbara Shelley, who is the widow of the last man to write about Promethea. Barbara warns her off the case, and on the way out the teen girl is stalked by a shadowy figure. When this dark presence tries to attack her, a hefty Promethea comes to her rescue, who closely resembles the woman whose house she was just at. It turns out this ‘Smee’ who attacked was trying to intervene before she took over as the next Promethea…

Promethea Book 1 is an intellectually stimulating, highly imaginative, transportative text, of which I got immense enjoyment. Like Watchmen, the story is rich and complex. Unlike Watchmen, almost all the main characters are female, and besides the overemphasis on lesbian jokes (which is a bit tongue-in-cheek I think), these women really kick arse.

The character of Promethea is part of the Immateria herself – she is a story, and is only brought alive through the imagination. For someone like me – passionate about the existence of stories and their ability to make things come alive – this was a fulfilling concept. Futher, there is a kind-of play on Baudrillardian/postructuralist notions where the two worlds are concerned eg. ‘Chairs exist – so does the idea of chairs’.

In this volume many other themes and ideas come to the fore, which I’m sure will be extended on in later volumes. These include war and conflict being ‘naught but a failure of the imagination’ (one Promethea was created to rescue young men from the trenches) and other philosophical musings fleshed out through the colourful, artful panels (hints of all kinds of aesthetic influence – from dystopian sci-fi, to fairytales, to gangster films, to pop art and so on).

A quest narrative is also introduced towards the end of this volume, which will obviously be continued, where each of the Prometheas fulfills some purpose. Sophie is yet to find hers, and it’s also brought up whether or not the merging of the imagination with reality would be chaotic or peaceful. It is also only revealed towards the end of the volume who one of Promethea’s main enemies is.

There are so many other small things to be enjoyed in this book besides the overarching, engaging storyline, and the inspired visuals. There is a lot of humour – nods to silly pop-culture fascinations with faux-existential texts (here, The Weeping Gorilla); baddies who can turn into a swarm of wasps but take a cab for the cultural experience; the pop-up pieces from the local news analysing the moves of New York’s multiple-personality-disorder mayor; the incompetent band of sciencey superheroes The Five Swell Guys, and much more.

The Dork Side of the Goon
В наличии
мягкий
550 р.
В корзину