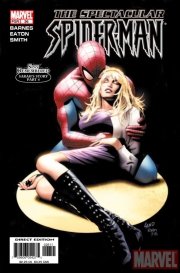 Peter Parker recently learned of a secret affair between Gwen Stacy, his late girlfriend, and Norman Osborn, the Green Goblin, during which Gwen became pregnant. Osborn arranged for her to give birth to their twins in France. These twins – Sarah and Gabriel – are now fully grown, the Goblin formula in their blood resulting in superhuman strength, but also in extremely rapid aging. When Peter informed the twins about their true parentage, Gabriel injected himself with Goblin serum, becoming the Gray Goblin. Sarah, after being shot by policemen and receiving a blood transfusion from Peter, shot her brother rather than let him harm the man who had saved her life.

Weeks later, Peter receives a phone call from a doctor in Paris, informing him that Sarah had been hospitalized. He leaves immediately for France, feeling responsible for Sarah's well being. Peter reluctantly ends up staying at the Stacy's French estate, where Sarah informs him of her history with a street gang. She and her brother worked as drug traffickers, even as their own dependence on pills heightened. Now, Sarah must pay off her brother's debt before she is harmed by the gang's leader, a man named Duprйs.

Peter's wife Mary Jane, worried about him being alone in another country with a dead-ringer to his former girlfriend, decides to follow Peter to France. When she arrives at the Stacy Estate, she discovers Peter and Sarah in embrace. Upset, MJ runs out on Peter. When she returns late that night, she is shocked to discover that Sarah has been hiding Gabriel, now dangerously insane, in the dark corners of the mansion.